Reports are out claiming that Paris Saint-Germain are plotting an ambitious bid to lure Arsene Wenger back to France. 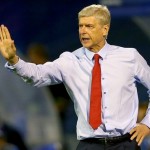 According to The Express, the French giants want to replace Laurent Blanc with the Arsenal manager if the club fails to win the Champions League this season.

It is believed that PSG’s Qatari owners are desperate to land the UEFA trophy and are prepared to make a change in the summer if unsuccessful again in Europe’s premier club competition under Blanc’s reign.

Wenger is on a shortlist of managers PSG have in mind and reports suggest he could be made available if Arsenal fail to land any major silverware this campaign.

PSG chairman Nasser Al-Khelaifi has seen former France defender Blanc guide the club to back-to-back Ligue 1 titles as well as the Coupe de France and two Coupe de la Ligues since taking over in the summer of 2013 but ultimately wants European glory and will stop at nothing until that is achieved.