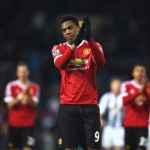 According to French publication Le 10 Sport, the Ligue 1 champions are eyeing a summer pursuit of the 20-year-old who left Monaco for United in a £36million deal in September last year.

The Paris giants are bracing themselves for the end-of-season departure of Zlatan Ibrahimovic, and quite possibly Edinson Cavani, and are targeting a player that can lead the line at Parcs des Princes for years to come.

The report suggests that Martial’s decent form in England, where he has scored 12 goals in all competitions for the Red Devils, has them considering an offer which may test the resolve of the Old Trafford outfit.

However, the fact he only joined United last summer and has impressed in his debut season in the Premier League is not all that conducive to the Manchester powerhouse offloading him after just 12 months.