It has been reported that PSG plan to outbid Manchester United for Real Madrid star Cristiano Ronaldo. 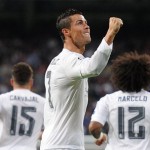 The Sunday Times claims that Paris St-Germain are ready to launch a world record £110m bid to sign Ronaldo from Real Madrid.

The French champions failed with an £87.3m bid during the summer transfer window but are ready to return with an improved offer.

Manchester United have made several attempts to bring Ronaldo back to Old Trafford in the last two seasons and the Portuguese star is reported to dream of a return.

But PSG desire to sign him will complicate United’s efforts to sign him, with their relationship with Real strained following the David De Gea transfer fiasco and the Ligue 1 side prepared to engage in a bidding war.