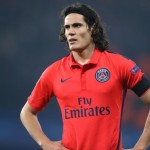 It has been reported that PSG president Nasser Al-Khelaifi has again declared he doesn’t want to lose Edinson Cavani this summer.

Premier League giants Liverpool, Manchester United and Arsenal are all keen on the Uruguayan.

But Al-Khelaifi told Le Parisien: “He is young and the future of the club.

“He needs more confidence but his last match (where he scored twice against Lille) proved his talent. He will be Parisien next season.”