Reports are out claiming that PSG are inviting offers for Lucas Moura. 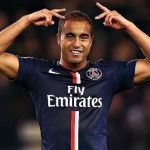 The Daily Express claims that the Brazilian international was linked with Manchester United before he joined the Ligue 1 side, and Liverpool, Arsenal and Manchester City would also be keen on him for the right price.

And Moura, according to reports in Spain, has been offered around having failing to hit the expected heights.

It is suggested Moura has been offered to Barcelona but the Catalan club is currently under transfer embargo, which would allow the Premier League clubs to swoop. Victor Valdes Still Has NO Future At Manchester United