It has been reported that PSG are ready to sell fullback Gregory van der Wiel. 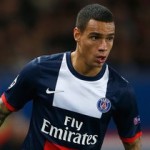 Le Sport 10 claims that PSG, needing to balance the books after breaking UEFA’s financial fair play laws, have decided to cash in on Dutchman Van der Wiel this summer.

The former Ajax fullback has been a long-term target for Arsenal and Manchester City.