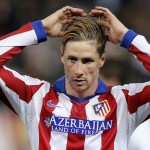 Torres won the tournament as a Chelsea player.

“When two teams who have such a high level meet, anything can happen. It’s the small details which are important and decide whether it goes one way or another in knockout ties,” he said.

“You also need the capacity to adapt to all kinds of problems. To say that it came as a surprise would be unfair to PSG – they put in a fantastic performance. I don’t think the outcome was unfair.”