Reports are out claiming that PSG will not consider selling Marquinhos to Manchester United this month. 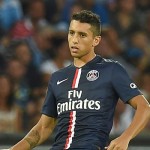 United boss Louis van Gaal is considering a summer move for the Paris Saint-Germain ace to bolster his defence.

But according to reports, PSG have told United it would cost a world-record £112m to land the 20-year-old.

A source told The Sun: “It was said in a jokey manner but Paris Saint-Germain are certain to expect a huge return on their investment to show they did not spend all that money for Marquinhos for nothing.”