It has been reported that PSG striker Edinson Cavani is keen to discuss a move away ahead of the January market. 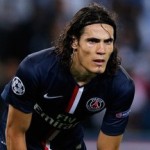 A big fee would be required to sign the striker, however, with Les Parisiens paying £55million for his services only last summer.

Cavani is unhappy about being played out of position consistently to accommodate Zlatan Ibrahimovic in the PSG line-up.

Liverpool are said to still be on the lookout for a striker as Mario Balotelli continues to fail to impress since his return to England.

Arsenal are also being linked with the Uruguayan.