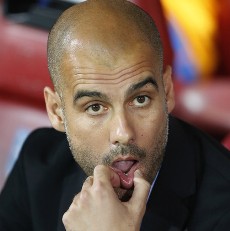 Reports are out claiming that Premier League clubs could be pipped by PSG for the services of former Barcelona coach Pep Guardiola.

The Guardian revealed that PSG could beat Chelsea to the former Barça manager as he is also the No1 option for them to replace the under pressure Carlo Ancelotti, who was sacked as Chelsea’s manager in 2011.

Despite the heavy investment of PSG’s owner, Qatar Sports Investments, over the past two years, which included the €20m (£16.2m) summer transfer of Zlatan Ibrahimovic from Milan that made him one of the top three paid players in the world, PSG trail Lyon by five points.

Guardiola, who is currently living in New York during a one year’s sabbatical after leaving Barcelona last summer, is also wanted by Manchester City and Manchester United but he may be tempted by the perceived vision at PSG rather than Chelsea’s short-term approach.

Guardiola has strong links with Qatar after being an ambassador for their successful 2022 World Cup bid and if Ancelotti is removed PSG reportedly want Eric Gerets as the interim manager – the Belgian recently became manager of Lekhwiya, the defending Qatari champions.