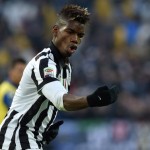 Reports are out claiming that Juventus ace Paul Pogba is in talks with PSG.

The Daily Star reported that the Real Madrid and Chelsea target has agreed a deal to join Paris St Germain, according to reports in France.

Pogba’s future in Turin has been up in the for the last few months following a series of comments made by his agent Mino Raiola.

Speaking to Le Parisien, his agent Mino Raiola said: “No, Ligue 1 is not too small for Paul Pogba.

“For Paul, all the big clubs are interesting regardless of which championship they play in.