It has been reported that Paris Saint-Germain have joined Manchester United in the race to sign Real Madrid defender Raphael Varane. 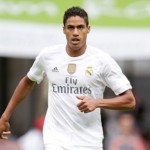 TalkSPORT is reporting PSG have reignited their interest in the 22-year-old, whom they first tried to sign back in 2011.

United boss Louis van Gaal is understood to have set his sights on Varane, after failing to sign his Madrid teammate Sergio Ramos during the summer transfer window.

The Red Devils and PSG could enter into a bidding war for the French international, who has made 73 La Liga appearances for Madrid.