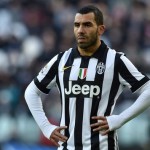 It has been reported that PSG are interested in Juventus striker Carlos Tevez.

The former Manchester United and Manchester City striker is entering the final year of his Juve deal and has been linked with Boca Juniors and Atletico Madrid.

Marca claims that French champions PSG are also keen and willing to bid for the Argentine.

Atletico fear being outbid by the French mega spenders, which have tabled a €12 million-a-year deal to his representatives.

Juve are desperate to keep Tevez and have drawn up a counter proposal to PSG. Buffon Pleased With Changes At Juventus