It has been revealed that Paris Saint-Germain’s reported pursuit of Paulo Dybala has given Liverpool hope of signing Ezequiel Lavezzi. 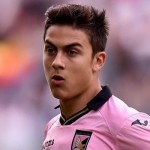 It is said that the French giants are eyeing the 21-year old Palermo striker who is being compared to Manchester City’s Sergio Aguero.

The Express is of the belief that PSG are willing to pay around £31million for Dybala, who has balso attracted interest from Arsenal and Manchester United, but only if they can sell Lavezzi this month.

That has opened the door for a potential move to Liverpool who are showing significant interest in the 29-year old Argentine.

Brendan Rodgers would love a quality attacker at Anfield this winter after the failed signing of Mario Balotelli and the injury absence experienced by Daniel Sturridge in the first half of the season.