Reports are out claiming that PSG coach Laurent Blanc has admitted his admiration for Shakhtar Donetsk star Alex Teixeira. 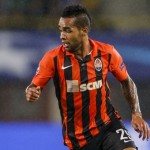 PSG face Chelsea in the Champions League next year and could also do battle over Alex.

The Brazilian sensation has confirmed contact with Chelsea in recent weeks.

But Blanc says: “We see that this is a talented player. He’s still a young player. We’re watching, to monitor closely.

“I think the big clubs also are watching him.”