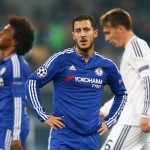 According to the Daily Mail, Ligue 1 giants Paris Saint Germain have joined Real Madrid in the pursuit of Chelsea star Eden Hazard.

Real Madrid failed to sign the winger in summer, and now they face competition from PSG, who believe that they can convince the £80m rated star to make a return to the French League.

The Belgian signed a five-year deal with Chelsea last season, but his recent struggles at the club under Jose Mourinho have convinced Madrid and PSG that he can be prised away from Stamford Bridge at the right price.