It has been reported that PSG must sell if they’re to push through a deal for Real Madrid winger Angel di Maria. 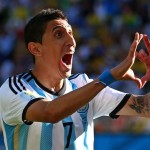 AS reported that PSG must seek to sell Edinson Cavani and Ezequiel Lavezzi if they’re to meet Real’s asking price for the Argentine international winger.

It is said that Real Madrid refuse to budge from their €60 million valuation for Di Maria, but need to sell with James Rodriguez due to arrive from AS Monaco for €80 million.

PSG can only move for the Argentine once they’ve made big sales – if they’re to comply to FFP laws.

Cavani, a target for Manchester United, and Lavezzi, wanted by AC Milan, are the two players most likely to move on.