It has been reported that PSG are split over keeping hold of Gregory van der Wiel. 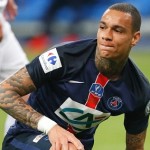 The Belgium international fullback has stated he wants to stay, but believes PSG want to sell him this summer.

Le Parisien claims that some PSG directors want to hand Van der Wiel a new deal. However, coach Laurent Blanc would be happy to see the defender sold.

Van der Wiel has been offered to Manchester United following the sale of Rafael to Lyon and Chelsea boss Jose Mourinho sees him as cover for Branislav Ivanovic.

Blanc has stated “regenerating the squad must include departures” with Van der Wiel among those in his sights.