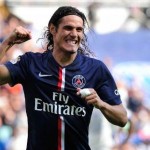 Reports are out claiming that PSG are being urged not to sell Edinson Cavani.

The Uruguay international striker is expected to demand a transfer this season, with the likes of Manchester United, Arsenal and Juventus circling.

However, Jean-Michel Larqué, the former St Etienne and PSG midfielder, told RMC it would be a huge mistake to let Cavani leave.

“If he was going today? Who, in Europe or in the world, with a modest transfer budget, could strengthen PSG? If he goes, could you get Suarez, no. Hazard, no. Agüero, no. In the end you’re going back for Gameiro.

“If he goes, I do not see a player who will come to reinforce the team attack to the same level.”