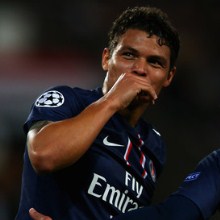 Paris St Germain’s president will attempt to sign Lionel Messi from Barcelona for €250million if the Catalans choose to meet Thiago Silva’s buy-out clause this summer, according to reports in France.

PSG president Sheikh Nasser Al-Khelaifi is unhappy that Barca are continuously being linked with PSG’s Brazilian defender and has vowed to play them at their own game.

“If Barca pay the buy-out clause of Thiago Silva then I will meet Messi’s buy-out clause,” he is quoted as telling ActuSports.fr.

Since the end of last term speculation has been rife that Barcelona will make a concrete bid for the PSG star, but the Ligue 1 champions have insisted he will not leave.

Earlier this week, Camp Nou supremo Sandro Rosell attempted to up the ante as he publicly declared that Barca want Thiago Silva and that has not impressed the player’s current club.

Now it appears that PSG are ready to use the financial backing of their Qatari owners to meet Messi’s buy-out clause and offer him an enormous contract to see if they can persuade the Argentine to leave Spain.