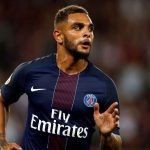 It has been revealed that PSG wing-back Layvin Kurzawa is attracting interest from across Europe.

The likes of Real Madrid, Barcelona, Manchester City and Arsenal have all been watching Kurzawa’s progress over the past year.

French pundit Laurent Perrin isn’t surprised and told Le Parisien: “If this pace continues of Kurzawa with PSG and the France team, he will become one of the world’s best wing-backs.

“Nevertheless we’ll talk in six months. Obviously the biggest clubs are interested in him. Barcelona In The Market For New Wing-Back Signing