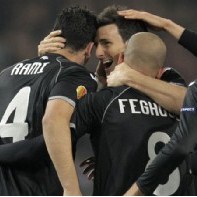 Valencia advanced to the quarter-finals of the Europa League with a 5-3 aggregate win over PSV Eindhoven after an entertaining 1-1 draw in Holland.

Ola Toivonen nearly gave the hosts the early goal they needed but was denied by a fine save by Diego Alves, before an even better stop from Przemyslaw Tyton prevented Valencia going in ahead at the break as he tipped Jordi Alba’s attempted lob wide of the post.

The visitors did go in front two minutes after half-time as Sofiane Feghouli’s shot deflected in off the head of Adil Rami, but Toivonen gave PSV hope when he coolly slotted past Alves from close range 15 minutes later.

The Brazilian goalkeeper denied PSV victory on the night with a stunning save from Kevin Strootman before Valencia had to see out six minutes of stoppage time with 10 men as Rami was shown a straight red card following a collision with Toivonen.