It has been reported that PSV Eindhoven winger Luciano Narsingh has spoken of his goal against Manchester United last night. 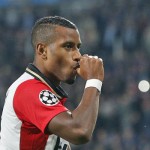 Narsingh’s goal proved the winner in the 2-1 Champions League triumph.

The 25 year old Dutch international said : “On paper, they are the better team and we have not created much, but we knew we could be dangerous from the counter,”.

“We studied a lot of videos of them and could see there was space in their defence which they often allowed.”

Narsingh added: “I’m not good at heading – but it’s a nice feeling!”