It has been reported that PSV Eindhoven chief Marcel Brands insist no offers have arrived for Memphis Depay. 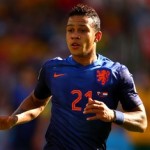 The young Holland winger has been a World Cup revelation and is attracting the interest of Tottenham, Real Madrid and Louis van Gaal’s Manchester United.

“Nobody has called, but the whole internet is full of it. If I have to believe the fans, he is already sold.

“However, there has been nothing reported to PSV. Nobody – yet,” said Brands.