Reports are out claiming that the PSV Eindhoven future of whizkid Zakaria Bakkali will be decided this month. 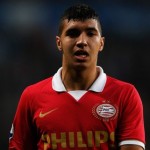 The 18 year old Belgium international has so far refused to commit to a new deal and is a target for Manchester United, Chelsea, Liverpool and Arsenal.

The talented winger famously turned down Manchester City as a junior player to sign for PSV.

But Voetbal International says with a year to run on his current deal, PSV have given Bakkali a deadline of June 26 to accept new terms or they will seek to sell him.

PSV chief Marcel Brands, conceding there has been tension between the player and management this past year, revealed: “We had a conversation and he wants to give clarity before that time.”