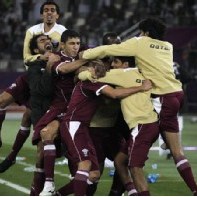 Qatar booked their place in the quarter-finals of the Asian Cup after the tournament hosts comfortably beat Kuwait at Khalifa Stadium.

Needing a win to seal their passage to the last eight, Bruno Metsu’s side effectively ended the game as a contest with two goals inside the first 16 minutes by Bilal Mohammed and Mohamed El Sayed.

Fabio Cesar wrapped up the win with a third just before full-time.

The win means Qatar finish second in Group A with six points, one behind Uzbekistan who drew 2-2 with China in day’s other game.