Theo Walcott scored the fastest Premier League goal of the season to sink QPR and send Arsenal into third place.
Walcott struck after 20 seconds, latching on to Mikel Arteta’s precise pass and firing past Rob Green.
Arsenal dominated the early stages and went close to doubling their lead when Green clawed a low Walcott snap-shot on to his post.
QPR improved after the break but the closest they came to a reply was when Wojciech Szczesny denied Loic Remy. 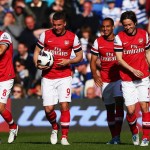