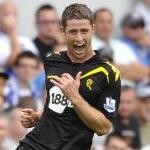 Queens Park Rangers’ return to the Premier League ended in misery with a 4-0 defeat to Bolton Wanderers at Loftus Road.

Bolton centre-back Gary Cahill scored a goal any striker would have been proud of in first-half stoppage time to give the Trotters the lead.

QPR continued to punch their weight after the break before two goals midway through the second half finished them off. An own goal from Danny Gabbidon and a deflected strike from Ivan Klasnic sealed a first win in six for Bolton. The Croatian then set up Fabrice Muamba for a fourth 10 minutes from time. QPR defender Clint Hill was then harshly sent off with just seconds remaining.