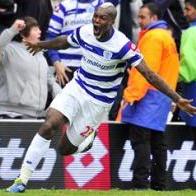 A game devoid of clear chances appeared to be heading towards a goalless draw as QPR threw everything at Stoke in a desperate finale.

But Stoke’s resistance was finally broken when Adel Taarabt’s corner was glanced on by Anton Ferdinand to Cisse, who tapped in at the far post to raise the roof in West London.

With QPR closing their campaign at the Etihad Stadium the Hoops enter the final weekend in 16th place, two points clear of Bolton, though they can also be caught by Wigan and Blackburn, who have games in hand.