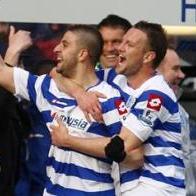 Queens Park Rangers did their hopes of staying up the world of good with a hard-earned 1-0 win over slumping Tottenham Hotspur at Loftus Road, their fourth home victory in a row.

A fine free-kick from Spurs old-boy Adel Taarabt gave the hosts a first-half lead they protected to the end, despite the mercurial playmaker’s dismissal late on after he kicked the ball away having already been booked.

Taarabt’s time-wasting ploy blotted a hitherto unblemished copybook as the talented midfielder drove QPR on: he will miss the short trip to Chelsea next week, but Mark Hughes’s best hopes of staying up is to beat Stoke City at home.

QPR – who have now had more players sent off this season than any other Premier League side – move three points clear of the relegation zone with three matches remaining, although second-bottom Bolton have two games in hand.