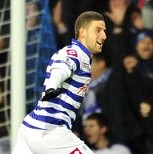 QPR finally won a league game at the 17th time of asking, dispatching west London rivals Fulham 2-1 to move off the bottom of the pile.

Adel Taarabt’s inspired performance proved the difference at Loftus Road as Harry Redknapp’s side belatedly broke their duck with a narrow victory against their near neighbours.

Few could have predicted the Hoops’ winless start to a campaign, with a summer of high-profile acquisitions and ambitious plans raising expectations in Shepherd’s Bush.

Last weekend’s draw at Wigan saw them break the record for the longest winless start to a Premier League season, with chairman Tony Fernandes this week admitting the season has been “nothing short of a disaster”.

The R’s have, though, shown signs of improvement since Redknapp succeeded Mark Hughes at the helm, following up three successive draws with a first win – thanks in no small part to Taarabt.