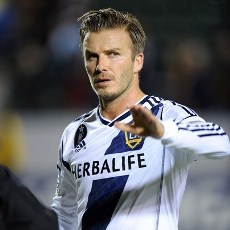 It has been revealed that Harry Redknapp is eager to sign LA Galaxy midfielder David Beckham for QPR.

The newly appointed QPR boss has admitted there is no cash in the kitty to sign reinforcements during the January transfer window.

That points to a move for Beckham, who is preparing to leave Los Angeles Galaxy after their MLS Cup clash with Houston Dynamo next Saturday.

“He is a top player and a fantastic person.

“We had him at Tottenham training and he was amazing around the place, absolute class.

“I haven’t discussed it with the chairman (Tony Fernandes) at the moment so we’d have to look at that but David could still certainly be a great asset to anybody, showing people how to train, how to look after yourself.

“His professionalism is second to none.”