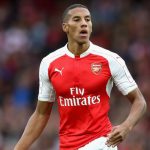 Reports are out claiming that QPR are moving for Arsenal youngster Isaac Hayden.

West London Sport says Arsenal could sell one of their most talented youngsters to London rivals QPR.

Versatile defender Isaac Hayden has only made two first team appearances for the Gunners despite now being 21 years old.

He spent last season on loan at Hull City, who are reportedly keen on making the deal permanent, but QPR have joined the race for his signature.


No-One Said I Could Succeed At Arsenal – Marc Overmars