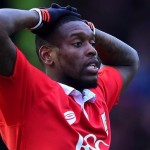 Reports are out claiming that QPR are set to open talks with Jay Emmanuel-Thomas following his departure from Bristol City.

The 24-year old striker was released by the Robins despite scoring 12 goals in all competitions in their League One title-winning campaign.

The former Arsenal and Ipswich Town forward is available on a free transfer and is poised to link up with the R’s who are preparing for life in the Championship following their relegation from the Premier League.