It has been reported that QPR are keeping tabs on Southend United goalkeeper Dan Bentley. 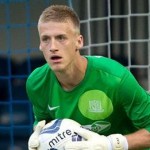 Basildon-born Bentley began his career with Arsenal, being picked up as a youngster aged just eight.

He came through the ranks alongside the likes of Jack Wilshere only to be released by the Gunners in 2008, before he was quickly snapped up by Southend.

The People reported that QPR are weighing up a January offer for the 21 year-old shot-stopper, who was man-of-the-match on Saturday in victory over Portsmouth.