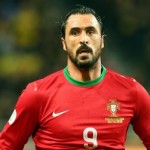 The Sunday Mirror reported that Redknapp is weighing up a move for free agent Almeida after QPR failed to sign a striker on deadline day.

The 30 year old former Portuguese international has been out of contract since leaving Turkish club Besiktas in May.

The former Werder Bremen striker has also been a target for West Ham United and Leicester City.