Interesting transfer news are out claiming that QPR are moving for released Fulham defender Brede Hangeland. 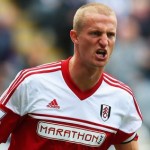 The Fulham Chronicle reported that QPR looked at the Norwegian international when they were struggling in the Premier League the season before last – but were put off by his £50,000-a-week wages and a £3 million transfer fee.

However, with manager Harry Redknapp desperate to beef up his defence in line with a new prudent price policy, Hangeland ticks the boxes.

Crystal Palace are reportedly the only other club in the capital showing interest in the man who served Fulham for six-plus years including a Europa League final appearance in 2010.