Reports have emerged claiming that QPR defender Rio Ferdinand has revealed he’s had offers from the game’s biggest clubs. 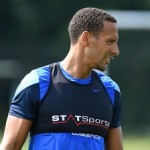 However the former England international says there was no way he was going to leave Manchester United.

“You tell someone from Manchester United or a team that’s winning things that they could go abroad and you would be hard pressed to get them to go.

“If Gareth Bale had been at Manchester United and winning trophies he wouldn’t have gone to Real Madrid. I was just turned on by winning. I wasn’t interested in going anywhere else.”