It has been reported that QPR face losing wing-back Mauricio Isla. 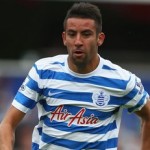 The 26 year old Chile international is on-loan at Loftus Road from Juventus and after a scratchy start, he is now beginning to impress for the Rs.

However, Isla’s loan could be cut short by Juve as they seek to use him as a bargaining chip in their own January market plans.

Juve are chasing Benfica midfielder Bryan Cristante and hope to bring the former AC Milan junior back to Italy during the winter transfer window.

The Serie A champs aim to offer Isla, Sebastian Giovinco and Luca Marrone in a multi-player swap for Cristante, says Record.