Reports are out claiming that QPR are chasing Chelsea striker Demba Ba. 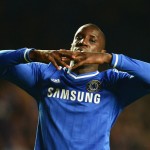 It is said that Rs chairman Tony Fernandes is willing to shell out big on a top striker ahead of their Premier League return this season.

The Sun reported that the 29 year old is being considered as he is made available from Chelsea this summer.

The Senegal international has also been linked with a move to Turkey since the end of last season.