Reports are out claiming that QPR are chasing Liverpool fullback Glen Johnson. 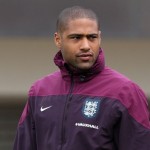 The Daily Star Sunday reported that the England international has just a year remaining on his Liverpool deal and has so far failed to agree a new one.

That has alerted Rangers boss Harry Redknapp, who had Johnson in his West Ham and Portsmouth teams.

Redknapp has stressed the importance of experience to cope on their return to the top flight. Tottenham, Liverpool To Do Battle For PSV Winger Memphis Depay

Daniel Agger Admits Liverpool Must Qualify For The Champions League