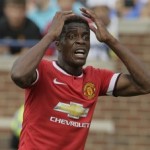 Redknapp revealed that he would like to loan Zaha if United made him available, but the popular boss is adamant that he would face a battle to land the wide-man.

He said: “He’d be fabulous if they [United] were to loan him but that’s up to them, he belongs to Man United.

“If he did become available on loan I’m sure he’s a player a lot of clubs would be interested in.

“No [we haven’t made an enquiry]. If we thought he was available he’d certainly be of interest.” Miralem Pjanic To Turn Down Man Utd For Roma Stay