A trio of Championship clubs are believed to be after West Ham United midfielder Ravel Morrison. 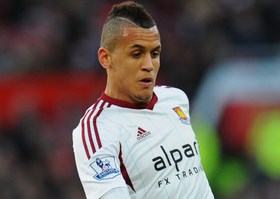 It is said that the England U21 midfielder is a loan target for QPR, Derby County and Leicester City with the R’s leading the race for his services.

However, any loan move will have to be sanctioned by Hammers boss Sam Allardyce who stated earlier on Monday that the former Manchester United man is still battling the groin injury that has kept him out since December.

“Ravel is still complaining about the problem that’s he had from before Christmas, that he’s got a rumbling groin problem,” Allardyce said.

“He’s going to have to decide whether to go for the hernia operation or not.

“The answer keeps being no, he doesn’t need it, so what we have to do is get him back training and get him back in the squad.

“I haven’t heard any rumours any other way regarding Ravel, but he certainly needs to get back training with the squad, and what he’s got to realise is that now everybody’s fit there’s severe competition here, especially with the new players as well.”