Reports are out claiming that QPR boss Harry Redknapp will not rule out moving for released Manchester United defender Rio Ferdinand. 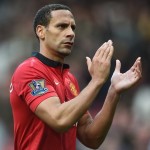 The former England international centre back has been dogged by injuries in recent years, but Redknapp believes he can still cut it at the top level of he stays clear of the treatment room.

He said: “I’ve not discussed Rio. He would be a fantastic free transfer for somebody.

“He’s a fantastic player and still has a lot to offer. He’s had his injuries and it’s whether he stays fit. If he fit’s he’s a top, top player.”