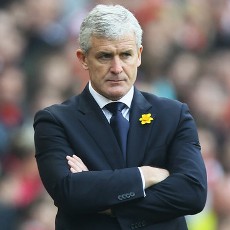 Reports are out claiming that Mark Hughes has been sacked by winless QPR.

The club refuted suggestions the Welshman had refused to budge after being asked to resign in a meeting at the club’s training ground on Monday evening.

However now they have issued a statement confirming the 49-year-old, who took over at Loftus Road in January, has had his contract terminated.

“This decision has been taken after careful consideration by the Board of Directors, following numerous meetings over the last few days.

“The Board of Directors wish to thank Mark for his commitment, hard work and dedication in his 10 months in charge. Mark has shown integrity and professionalism throughout his time here, but ultimately the circumstances we find ourselves in have left the Board of Directors with very little choice but to make a change.”

The sacking comes just 24 hours before QPR travel to face Manchester United at Old Trafford and, with ex-Tottenham boss Harry Redknapp the overwhelming favourite to step in, the club confirmed they are looking at appointing a new manager as soon as possible.

“The Board will now be working actively to put a new managerial structure in place as soon as possible,” the statement continued.

“Mark Bowen and Eddie Niedzwiecki will take charge of the R’s trip to Manchester United in the Barclays Premier League on Saturday afternoon.

“The club will be making a further announcement in due course.”

Rangers then cancelled their pre-match media conference which was scheduled for Friday afternoon.