Reports are out claiming that QPR striker Charlie Austin has set his sights on a return to the Premier League before the end of the summer transfer window. 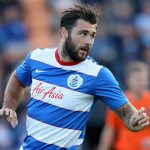 The England international striker scored his first goal of the Championship season in QPR’s 2-2 draw with Cardiff City on Saturday.

The former Burnley star has been linked with moves to Tottenham and West Ham United among other top flight outfits, and the 26-year-old has made no secret of his desire to find himself back on the books of a Premier League club this season.

“I don’t know [about my future] to be honest,” Austin told Sky Sports.

“Like I’ve said the whole way through, I’m here to play and I’ll leave that to my agent and the owners of the football club and whatever they decide will be.

“I’m focussed on the job in hand. Every player wants to play in the Premier League and I would be lying if I said I didn’t want to be there, but I’ve got to work hard while I’m at QPR and try my best.”