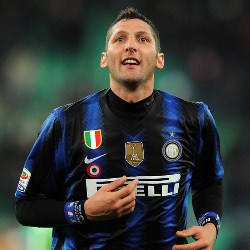 Inter Milan defender Marco Materazzi has revealed that he could leave this summer.

The former Everton defender turns 38 in August and has been linked with one last season with the MLS or at QPR.

Materazzi told Inter Channel : “I spoke to President Massimo Moratti, as I always do at the end of every season,”.

“The Nerazzurri jersey is like a second skin for me, so to come back as a director would be wonderful.

“I have not yet evaluated offers from other clubs. It would be a shame to leave Inter and I would certainly give an adequate goodbye to the fans who have given me such a great life here.

“I don’t know if I will be at Inter next season, but I haven’t made any decision. The President gave me carte blanche and said I can do what I want. Our rapport is so clear that he’ll be happy whatever I decide to do.”