Interesting transfer news are out claiming that QPR are on the brink of signing Swansea City defender Ashley Williams. 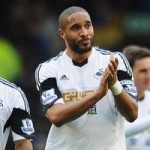 The Daily Mail reported that the Wales international centre back is ready to join Queens Park Rangers in a £4million deal.

The 29-year-old Swansea captain is in the final year of his contract and is also linked with a move to Arsenal.

It is said that Swansea will listen to offers rather than lose him for nothing next summer. Arsenal Linked With A Move For Udinese Goalkeeper Samir Handanovic