Reports are out claiming that QPR chiefs want to DUMP big earner Rio Ferdinand in January. 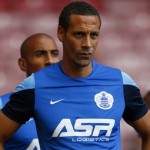 The Mirror reported that he could be offloaded in the winter market.

Ferdinand, who will be 36 next month, was dropped for Sunday’s defeat to Liverpool after failing to impress since his arrival on a free in the summer.

The former England defender was signed by Harry Redknapp – despite opposition within the club – following the Hoops’ return to the top flight, after being released by Manchester United.

It is now understood that those who were against his one-year, £35,000-a-week deal at the time feel they have been vindicated by Ferdinand’s below-par displays in the early weeks of the season.