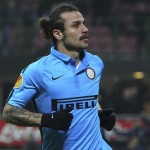 Reports are out claiming that QPR have a deal with Southampton for striker Dani Osvaldo.

The London Evening Standard reported that QPR have agreed a deal with Inter Milan to take striker Osvaldo on loan for the rest of the season – but are struggling to convince the Italy international to move to Loftus Road.

Osvaldo is currently on a season-long loan at the San Siro from Southampton, but the Serie A club want to end their agreement early.

Inter director Piero Ausilio travelled to the UK to first hold talks with Southampton, who have given permission to cut short their agreement on the proviso the Italian side find another team for the 29-year-old.